We can bring your business dreams to life 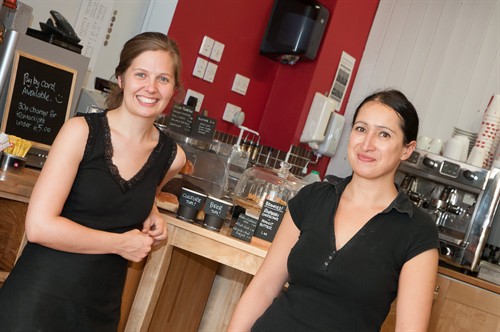 It's a bustling morning in Edinburgh's west end and business is good for Liz and Aleksandra, the owners of Wee Coffee Bar on Morrison St. A man has just placed a large food order - he looks as if he works in one of the financial institutions nearby. The pair opened their shop last year and their venture is proving that entrepreneurship is a challenging but ultimately rewarding choice in an ailing job market.

'I was tired of earning minimum wage and wanted to do something positive for my future,' said Liz.  'Finding  a career in the professions we were qualified to do was proving difficult and we knew that we could run a coffee shop so we decided to strike up a partnership. It all started from there.' Four months after their initial talks they were up and running but not without a few challenges along the way.

Getting the business off the ground

'We had never written a business plan before and doing it well took a lot of hard work. We began with the idea of opening a shop on the Royal Mile but that fell through after issues with the price of the premises we looked at. We also had to go through a series of credit checks. The banks were often quite difficult,' said Aleksandra.

But they persevered and having managed to finance the business they decided to take out a commercial lease on a property on Morrison St. The owner of the existing shop was keen to sell but there were several tricky legal issues that had to be dealt with. The day before these problems sprang up they had handed in their notices - they were out of work now and unable to get their new venture started without help.

'We were obviously a little worried that the process was being held up but we had to keep going. We used it as motivation - there was no going back,' said Aleksandra. They set about looking for a solution to the problem.

'After a day spent phoning solicitors for legal advice - some of them quoting ridiculous amounts of money - we spoke to Blair Cadell who advised us on how to move forward without decimating our budget. We discovered that there was a clause in the lease that meant the owner couldn't sell and we couldn't buy without the permission of Edinburgh Council. Unfortunately the Council can be reluctant to take you on if you are first time business owners,' said Liz.

Guided by Blair Cadell's experienced solicitors the pair managed to carry out the purchase of the property. Then the fun began. 'Once we had the keys we realised the place really needed some love. We had to gut it and redecorate it completely. During that time we did all the branding for the shop too, including the website,' said Liz.

Wee Coffee Bar is just over the road from the Edinburgh International Conference Centre (EICC) on Morrison Street, Tollcross.

Whether you are starting up a new business venture, looking at buying premises, taking on a commercial lease or developing a new business strategy Blair Cadell will be able to assist you.

We deliver Big Firm Service at a Competitive Small Firm cost. Call us now on 0131 337 1800 for an initial consultation.