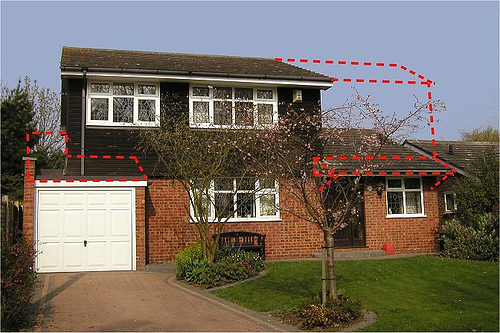 Adding some value to your property can be as easy as giving the place a lick of paint or replacing a tired rug - even the simple act of tidying can improve the old feng shui and give your home a boost. But according to a study carried out by Glasgow University and the Glasgow Solicitors Property Centre, the best way to improve the value of your property is to increase its space.

So if you are faced with the choice of spending money on an existing space or creating a new one, it appears the latter option is favourable. The research showed that improvements such as new bathrooms or kitchens often didn't add as much value to the property as they cost to install. Things like luxury designer fittings often cost more to buy than they added onto the sale price. Ugly or badly designed bathrooms and kitchens were found to reduce the selling price in a many cases.

What this study shows is that spending money on making your home look better will often cost more than you gain. Therefore, a good rule of thumb for anyone improving their home with the idea of selling it is; if you are faced with a choice between an expensive and a cheaper option, favour the cheaper option - as tastes can be fickle.

Yet having said that, the higher the property value, the more important it is that the fittings are high quality ones.  The value of a property won't shoot through the roof just because you have filled it up with expensive fittings, but you can damage the sale of an expensive property with poor quality fittings.

The research also showed that shrinking the size of the garden to accommodate an extension will generally add more value than having a larger garden.  Similarly, converting at least part of an integral garage in to extra living space will add more value than you would lose from having less garage space. Converting loft space is a great idea as it doesn't involve the sacrifice of space that might otherwise be used for something else.

Of course, having a large garden or a large garage (or both) will attract buyers who particularly value those attributes. Keen gardeners and car enthusiasts for example. But the evidence from thousands of sales and a detailed analysis of the attributes of each property, shows that buyers in general tend to value usable living space more than anything else.

As property experts Blair Cadell are in the best place to advise you on your purchase plans, with area and price comparisons, and opinion on market conditions, practical property issues and negotiating tactics