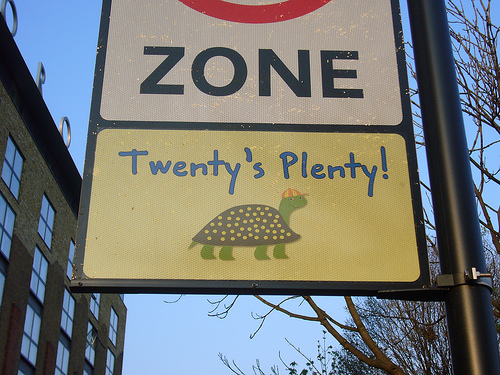 Edinburgh council have revealed that by April 2017 the city will see a 20mph speed limit imposed across residential streets, main shopping areas, the city centre, and roads that see high levels of pedestrian and cyclist activity.

The changes will make Edinburgh the first city in Scotland to implement road safety measures of this kind. The plan also involves reducing speed limits on some main roads (those with homes and businesses on them) to 30mph. So prepare yourself for a fairly dramatic change of pace.

The new plans are based on research from a pilot scheme in Marchmont, the Grange and Prestonfield last year.

Councillor Lesley Hinds, city transport convener, told the Evening News this week that: "We'll be consulting with residents and all interested parties, including Lothian Buses, before we draw up detailed proposals for any new 20mph areas.

"The nature of the busier roads on which a 20mph limit is likely to be taken forward means impacts on bus journey times are expected to be very limited indeed.

"Lower speeds in residential areas and shopping streets are not just good for safety and environmental reasons. Slower traffic makes streets more attractive to residents, pedestrians, cyclists and children, improves the environment for business and enhances quality of life."

Transport statistics for Britain show that more than half of road deaths and serious injuries occur on roads with 30 mph limits and that the UK has the highest percentage of pedestrian road fatalities in Europe. Britain also has one of the lowest levels of children walking or cycling to school in Europe with parents frequently citing traffic speed as the main reason why their children are not allowed to cycle or walk to school.

In Hilden, Germany, 24% of in town trips are made by bicycle. All residential streets have an 18.5 mph speed limit, with some reduced to 9 mph. Road side cycle tracks are being removed as the road is an even safer place for cyclists to be and is more direct and more convenient.

Blair Cadell are a leading firm of Edinburgh solicitors, dealing in a wide range of property, business, tax and personal legal services. We base our reputation and success on "clients returning for advice and assistance they can rely on at an affordable price" (Recommended Law Firms Guide 2013)