Edinburgh Trams to Start in May 2014

A stop near you could boost the value of your property 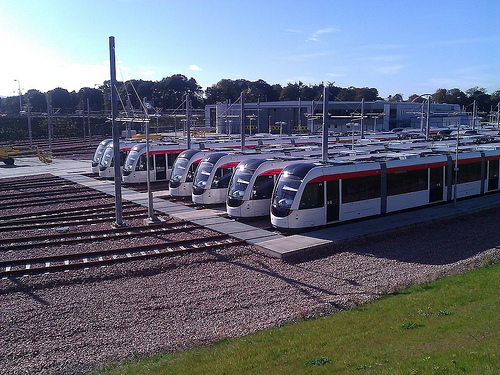 After a long and, at times, painful journey it has finally been announced that trams will be running in Edinburgh by May 2014.

The exact date of the first service will be announced in January after several months of testing. During the test phase, more than 150 tram journeys will cover the full route from Edinburgh Airport to York Place. The first tram to make it along this route will be a test service on December 9. There will surely be a few people out braving the cold to see that.

Councillor Hinds said: "Within weeks the city centre will be clear of tram works for the first time in six years - the end of the tram project and the beginning of a tram service are clearly in sight.

"I'm pleased that the end date for the project has been brought forward but I'm very keen for it to be finished even earlier if possible. I've asked that all of these timeframes are reassessed at the beginning of next year so that any further gains in progress can be factored into our plans.

"Our target for launch is now May 2014 but we'll bring this forward if we can and we'll announce a start date for the tram service when we're 100% sure. There's a major testing, commissioning and driver training programme to be done, work to be done on tram stops and, of course, a Scottish winter to get through."

Transport Minister Brown said: "The announcement that the infrastructure works will be completed and handed over to the council by next March will ensure they are in a position to have trams running ahead of the revised July 2014 delivery date. We will continue to work with the Council and the contractor to look at opportunities to bring the programme forward even further where at all possible.

"This is good news for people and business in Edinburgh and we are all looking forward to a city centre free of road works and major disruption ahead of the busy Christmas period. It puts an end to the misleading speculation over recent weeks about when the tram would be finished and provides much needed clarity to businesses to plan ahead with confidence."

Earlier this month, Andrew Burns, leader of Edinburgh Council predicted that houses in Edinburgh situated close to tram stops will benefit from a price hike similar to that enjoyed by properties in London near Tube stations.

"There will be a positive impact on property prices around the stops," said Burns. "I'm thinking of places like Haymarket, where there will be a stop outside the train station, which is Scotland's fourth busiest. That will make a significant difference to that whole area."